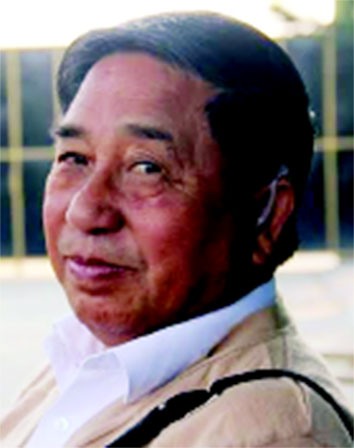 NAMSAI, 6 Oct: Former principal of Government Higher Secondary School, Tezu and chairman of the Tai Khamti tonal script committee, Chaunoi Inkalit Mannou passed away on Tuesday at around 8.20 PM at his residence in Namsai.

Mannou was admitted to a private hospital at Dibrugarh, Assam where he recovered and was brought back home. However, his health started deteriorating.

Born in 1942, late Mannou was one of the most learned persons of the Khamti society. He graduated from college in 1968 with the distinction of being the founder batch of the JN College, Pasighat, East Siang district. He joined government services in 1969 and retired in the year 2009 as a renowned principal of GHSS, Tezu.

He had contributed immensely in fighting against social evils and uplifting the community in the fields of education, culture and language. He is also credited with developing and finalising

the revised tonal script of Tai Khamti as chairman of the committee. He was also an advisor to the Tai Khamti Singpho Council (TKSC).

In a condolence message, the TKSC expressed shock and sadness on the loss of one of its learned and senior members.

“With his sudden and untimely demise, the Tai Khamti society, in particular, has lost a tall personality, a guide and a guardian. The huge void of his absence will stay long and will be difficult to fill up soon,” the TKSC said in a condolence message.