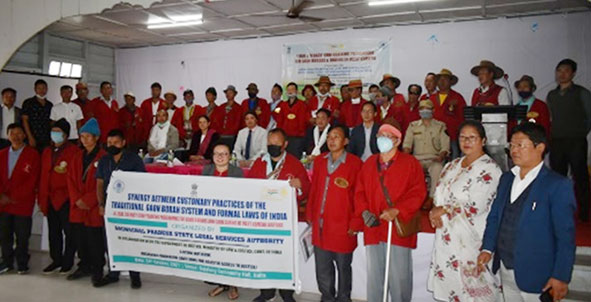 The participants were informed about the Assam Frontier Regulation of 1945 and its amendment, the AP Civil Courts Act of 2021, the basics of criminal and civil laws, the concept of alternative dispute resolution, and several other related topics.

On the occasion, a new initiative titled ‘Each one, teach ten (E1T10)’ was also announced by the APSLSA. Under this initiative, each trained GB will educate 10 ordinary members of the community on the concept of free legal aid and assistance and associated schemes and acts that they have at their disposal, who then can spread the information to others in the community.

The objective is to spread the message of equal access to justice to everyone, particularly those people who cannot be reached through normal awareness programmes, APSLSA Member Secretary Jaweplu Chai said.

The training programme was a first of its kind planned under the DISHA project of the law ministry, and is expected to sensitize around 500 GBs directly and an additional 5,000 rural residents indirectly through the E1T10 programme.