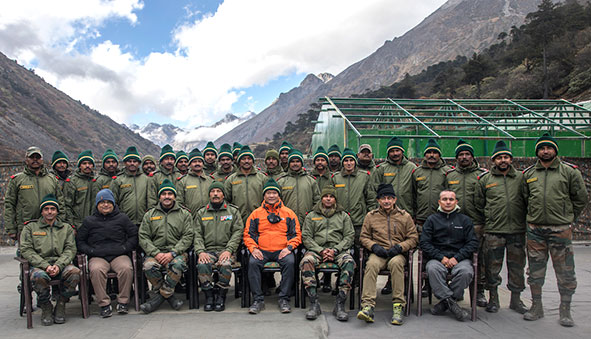 The Yangtse border post was recently in the news over a reported face-off between the Indian Army and the Chinese PLA. The chief minister, on behalf of the countrymen, expressed deep gratitude to the Indian soldiers who challenged the reported ‘infiltration’ and forced the PLA to withdraw.

“We are safe because you guard our borders with utmost sincerity. People of India, especially of Arunachal Pradesh and particularly of Tawang district, will remain indebted to you all forever,” he said.

Interacting with the Indian Army personnel guarding the remote border outpost, he said that development of border areas is a priority of the state as well as the central government. He said that, despite difficult terrains and harsh climatic conditions, the pace of infrastructural development has accelerated in recent years.

Khandu said that the policy towards border areas has changed for good since Narendra Modi became the prime minister.

“Lack of political will of the erstwhile government has changed into a commitment to develop all kinds of infrastructure for ease of life of the border people,” said Khandu at Chuna, somewhere along the Tibet-China border in Tawang district.

The chief minister said that agencies like the BRO, the Indian Army, the ITBP, the state government departments, etc, had earlier independently submitted their requirements for infrastructure development to the central government as per their own needs.

“Since a couple of years, we have started to coordinate and consult with each of these agencies and collectively submit proposals for border area development, taking into consideration requirement of each agency. This way, it has become easier for the central government to decide and approve sanctions,” Khandu said.

Expressing pride over the presence of the Arunachal Scouts in the “China sector,” he said: “They being sons of the soil are well acclimatized to the altitude and weather and accustomed to local customs and way of life.”

The chief minister said that the central government has agreed in principle to raise four more companies of Arunachal Scouts soon.

Referring to the common request of army personnel and the villagers for mobile connectivity, Khandu said that the central government has approved and sanctioned installation of 980 4G mobile towers in the state. He assured that first preference will be given to the border areas.

He expressed hope that the army would continue to maintain the great rapport and bonhomie developed over the years with the local residents as more than often the latter depend on the army for emergency and daily needs.

“People living in the border areas are our first sentinels marking the start of our territory. Jawans and officers will go on transfer after a few years but the locals will stay here forever. Please keep on the cordial relationship with them, and as and when you leave the place, enlighten your relievers to continue the tradition of civil-military relation,” Khandu urged.

He was accompanied by Planning Commissioner Prashant Lokhande and a host of local administrative officers.

Responding to several issues raised by the villagers, Khandu assured to develop the infrastructure of the government school and post sufficient number of teachers at Tse Chu. He highlighted flagship programmes like the Swachh Bharat Abhiyan, the Jal Jeevan Mission, the PM Ujjwala Yojana, the CMAYA, etc, and urged the villagers to avail the benefits. He directed the accompanying district officials to “extend the benefits of all welfare schemes and programmes to the people by facilitating these at their doorsteps.”

The CM also attended a Covid-19 vaccination camp at Mago, where the second dose of the Covid vaccine was administered to 178 persons under the supervision of DIO Dr Rinchin Neema and a medical team from the Jang CHC.

The tour ended with a 10-km trek from Mago to Thingbu on Tuesday evening. (CM’s PR Cell)