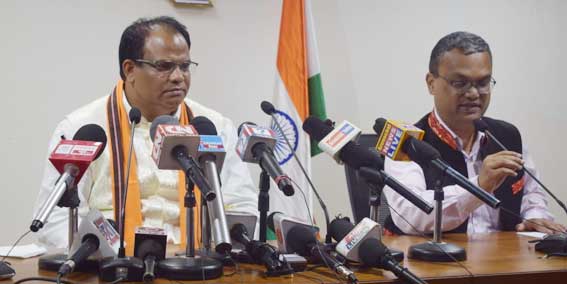 ITANAGAR, 28 Oct: Union Minority Affairs Minister John Barla on Thursday said that many states in India, including Arunachal Pradesh, have not been able to avail the benefits of the schemes under his ministry owing to lack of awareness.

The minister, who is currently in Itanagar, has come to Arunachal to create awareness about the schemes under the minority affairs ministry.

“There are lots of schemes under the minority affairs ministry, but due to lack of awareness the schemes do not reach the people. Other than scholarship, we can build residential schools, hostels, coaching centres, hospitals, etc. However, due to lack of awareness, these schemes could not be availed by the people. So, it is my responsibility to ensure this scheme reaches every state and the people,” he said.

Barla further said that Arunachal and other Northeast states would greatly benefit from the schemes “as the Centre is giving fund on 90:10 ratio of funding pattern for the Northeast states,” and advised the state government to “send proposals as much as possible.”

Earlier, the union minister visited Tawang district and met Chief Minister Pema Khandu there. Barla will be visiting a few other districts in Arunachal.