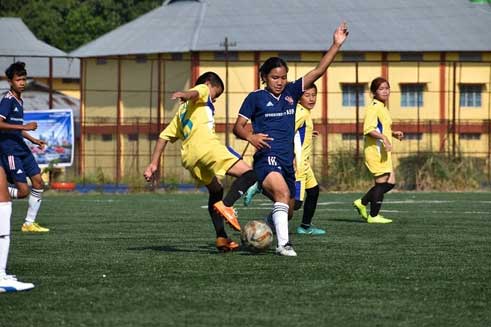 ITANAGAR, 28 Oct: Lohit and Papum Pare entered into the quarterfinals of the State Women’s Football Championship after defeating Lower Dibang Valley (LDV) and Women’s College Lekhi, respectively, at the Sangey Lhaden Sports Academy playground in Chimpu near here on Thursday.

In the first match, Lohit registered a comfortable 3-0 win against LDV. The match started on an unfortunate note for LDV when Oyinggebi Lego scored an own goal in the 20th minute of the first half. Roshni Manyu doubled the lead for Lohit in the 32nd minute, which was later extended by Ani Tayang (35th minute).

Even though LDV fought hard in the second half to stop Lohit from scoring more goals, the match eventually ended with a 3-0 score line.

Lohit captain Badim Boo was adjudged the best player of the match. Lohit qualified for the quarterfinals with maximum points.

In the last match in Pool D, Papum Pare outplayed Women’s College Lekhi in their second match of the league round. Both the teams have already qualified for the quarterfinals by virtue of being the only teams in the pool.

Women’s College started the match on a promising note as they drew the first blood through a goal scored by Debia Hawty in the 22nd minute of the first half, which was cut short by Techi Amin of Papum Pare (24th minute), and the first half ended with a 1-1 score.

The second consolation goal for Women’s College Lekhi came from Debia Hawty in the 59th minute.

Papum Pare team captain Techi Amin was declared player of the match for her four goals.