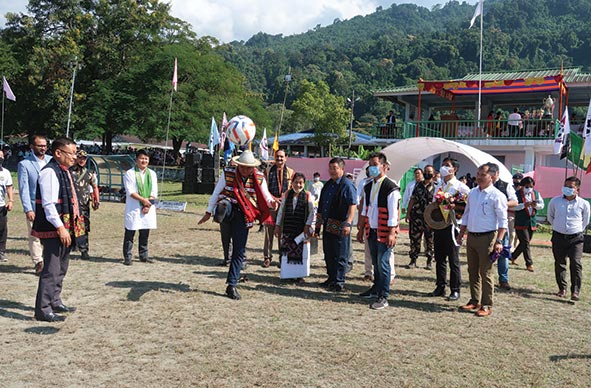 This football tournament is played every year in memory of Ita Pulu, a pioneer of the Idu Mishmi community, and sees participation of teams from various districts like LDV, Dibang Valley, Anjaw and Lohit.

Natung congratulated the organizing committee and said that the contribution of late Ita Pulu towards the development of Lower Dibang Valley district was immense and cannot be ignored.

“Today Arunachal is at par with any other state of the country in every field, be it sports, railway, or any other field for that matter. We should all work hand in hand to take our state to newer heights,” Natung said.

His message to the youths was: “Drugs chhoriye, khel se juriye.”

“Games and sports help us in keeping sound mental and physical health. You should not get involved with drugs, and show more participation in games and sports,” he said.

Thirty-two teams, including five girls’ teams, are participating in the NIPMFC this year.

The final match will be played at the end of this month.

The tournament is being organized by the Naba Ita Pulu Memorial Football Cup Committee (NIPMFCC) in collaboration with the youth affairs & sports department and the Arunachal Pradesh State Commission for Women. The themes of the football cup are ‘Say no to drugs’ and ‘Women empowerment’.

In the boys’ category, the opening match was played between Cheta FC and Abali FC. Cheta FC won by 1-0 goal.

In the girls’ category, Coco FC won against GHSS Roing by 7-0 goals.