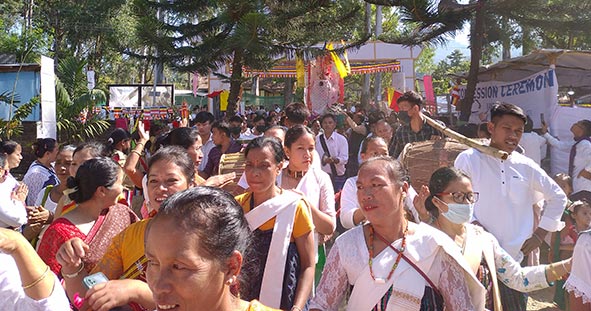 MIAO, 7 Nov: The 49th Pavarana festival (Kanto Poi) was celebrated at the Maha Dhammarajika Vihara here in Changlang district on Sunday with the hoisting of the international Buddhist flag by Ven Narinda Mahathero in the presence of Theravada Buddhist monks and devotees.

a grand success. The devotees, clad in traditional attires, thronged the venue with patesas (kalpataru).

Kanto Poi is celebrated on a rotation basis after three months of the retreat of monsoon.

During the festival, the bhikkhus sought forgiveness from their gurus for any physical, oral, mental and even spiritual misgivings that might have been committed knowingly or unknowingly.

The devotees, who came in thousands, were blessed by the bhikkhus for wellbeing, prosperity and peace of all beings.

Organizing committee president Sekhum Ronrang thanked the NSS volunteers and the NCC cadets of the GHSS here for regulating traffic and food distribution during the festival.