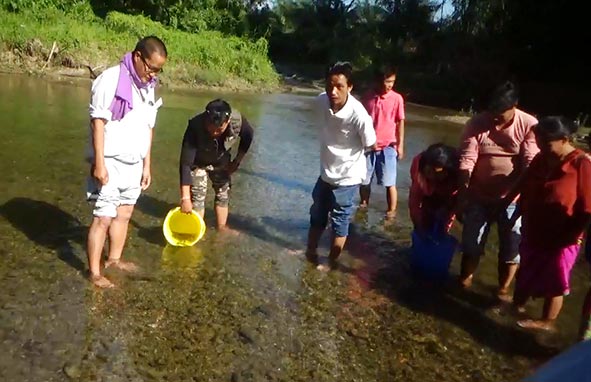 RUKSIN, 8 Nov: The 37-Assembly Constituency Welfare Forum, in collaboration with the East Siang district fisheries department, on Monday organized a river ranching programme on a trial basis, during which over 5,000 fingerlings of various carps and indigenous fish species were released into the rivers and perennial streams in Pasighat West area in East Siang district.

The forum started the programme from Sika Tode village, where the forum’s president Osong Saroh along with District Fisheries Development Officer (DFDO) Doyum Davi, District Fishery Officer Kabang Komut and the villagers released about 1,000 fish seeds into the Tode river.

Later, the members of the forum and the officers released fish seeds into the rivers in Rayang, Niglok and Mirem villages.

Saroh appealed to the villagers to adopt environment-friendly fishing practices.

“We are conducting the programme on a trial basis. We are making efforts to create awareness among the people about the consequences of practicing non-conventional fishing methods,” Saroh said, adding that the objective behind releasing the fingerlings was to enhance the dwindling fish population in the rivers and streams, as well as to conserve the flora and fauna.

Dwelling on the environmental importance and nutritional value of fishes, the DFDO said that “non-conventional fishing methods, such as electric fishing, use of explosives and poison not only kill the fishes but also other aquatic animals, thus causing collapse of the entire aquatic ecosystems.”

“Rude and indiscriminate fishing is leading to the extinction of many indigenous fish species in the state,” Davi said.

The DFDO suggested to the villagers to take up fish farming on a commercial basis and protect the indigenous fish species in natural water bodies. He assured the villagers that his department would help them in availing fishery-based schemes.