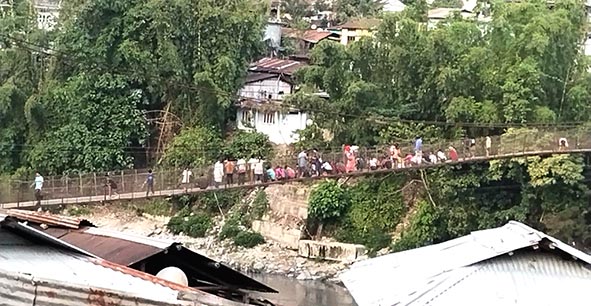 While only six persons are allowed to use the weak suspension bridge at a time, dozens of people, including minors, were seen collecting shield bugs on the bridge on Monday.

More than 17 people had drowned in the Kameng river on 30 October, 2011, when the suspension bridge, connecting Seppa township with New Seppa, had collapsed. The incident had occurred as a result of people overcrowding the bridge to collect shield bugs.

To avoid another untoward incident, the DA has imposed 144 CrPC at the Tari bridge.

“No person shall use any bridge for collecting Tari or Gandhi Puk or any other edible insect in East Kameng district. Anyone found violating this order shall be booked u/s 188 IPC,” the order stated.

“This order shall come into force with immediate effect and shall be effective for a period up to two months from the date of issue of this order,” it added.