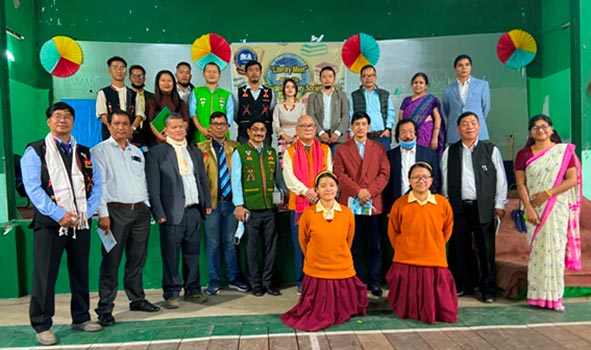 KHONSA, 14 Nov: The Arunachal Pradesh Literary Society (APLS) has spread its wings with the inauguration of its Tirap district unit by APLS president YD Thongchi at a designated corner of the district library here on Sunday.

This was followed by the grand opening ceremony of the ‘Tirap unit of APLS-cum-literary meet’ at the community hall of the circuit house.

Speaking on the occasion, Thongchi dwelt on “the challenging journey in the field of literature,” and called upon the writers of Tirap district to join the APLS and make the literary and library movement a success in Tirap.

“Tirap belt in particular has a glorious past and an impactful story to tell,” Thongchi said while sharing the future vision of the APLS.

He also lauded Tirap Deputy Commissioner Taro Mize for his support and personal interest in literature, and expressed appreciation for District Library Officer Chaphun Sumnyan for allocating a corner for the APLS Tirap unit in her office.

Mize in his speech said that “another chapter has been added to Tirap’s glorious history with the formation of APLS Tirap unit for the first time.”

APLS general secretary Mukul Pathak delivered a brief note on the vision and mission of the APLS, while senior APLS member Thajam Aboh shared his experience in the field of literature. Aboh also distributed copies of his poetry book Echoes of the Heart.

This was followed by a literary meet in the presence of young and budding literature lovers.

In the drawing competition on the theme, ‘Literary movement in Arunachal Pradesh’, Sania Blange of the RKSM Khonsa won the first prize, Phohee Wangsa of GTSS Khonsa won the second prize, and Aina Droma Darang of RKSM Khonsa secured the third prize.

Thongchi distributed the prizes to all the winners. (DIPRO)