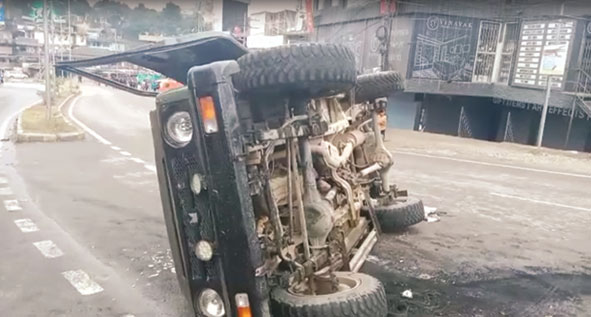 ITANAGAR, 23 Nov: The 12-hour capital bandh imposed by the All Nyishi Students’ Union (ANSU) by and large passed off peacefully on Tuesday.

Even though there was no report of any major violence, for a brief period in the afternoon there was a tense standoff outside the civil secretariat when ANSU activists protested against Chief Secretary Naresh Kumar’s attending office.

However, the situation was brought under control by way of hectic parleys by IGP (Law & Order) Chukhu Apa and Itanagar Capital Region DC Talo Potom, who spoke with ANSU president Nabam Dodum and GS Gora Rikam to clear the secretariat area. However, ANSU activists allegedly burnt down an APSTS bus that was parked outside the secretariat, and a vehicle of the magistrate. Apart from this, there was no major report of violence.

The ANSU imposed the 12-hour bandh to press its demand for immediate transfer of Education Commissioner Niharika Rai and withdrawal of an FIR lodged against the central executive members of the union.

Meanwhile, speaking to the media, the ANSU president blamed the chief secretary for the violence outside the civil secretariat.

“We demanded that he immediately leave the office. But, citing some excuses, he kept delaying and provoking the activists. Otherwise, we maintained utmost restraint during the whole day,” Dodum said.

The ANSU president urged the elected MLAs to lead the state and stop fearing IAS and IPS officers. “Right now, a group of bureaucrats who all hail from mainland India and do not know the local issues are running the show. Elected leaders are sidelined. It is time our leaders also worked for our own people and stopped behaving like assistants of these bureaucrats,” Dodum said.

He further said that the ANSU would intensify its agitation in the coming days if the government fails to respond to its two-point demand.

“We will soon hold a meeting of central executive members and will take a decision on the further course of action. In the next few days, we will also wait to see how the government responds to our demand,” added Dodum.