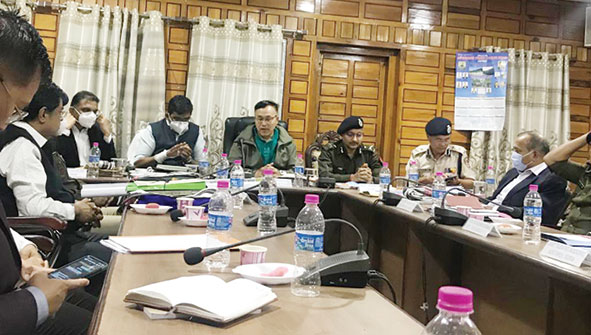 Expressing concern over the recent incident in Kimin and Kakoi circles, Papum Pare DC Pige Ligu said, “Efforts should be made from both sides to prevent occurrences of such incidents in future, besides working to maintain age-old bonhomie in the foothill areas by maintaining the status quo on the issue of boundary.”

The DC also highlighted the problems that the people residing in the boundary areas face, such as lack of basic amenities like roads, power and water supply, and opined that “development should be given a chance in such areas to improve the living condition of the people on humanitarian basis.”

Terming the recent incident “unfortunate,” North Lakhimpur DC Sumit Sattawan said that “boundary-related issues should be addressed in a proper forum.” He urged the Papum Pare administration to “halt the ongoing PMGSY road construction till further discussion and awareness campaign among people living in boundary areas.”

Sattawan also clarified that “no eviction will be done to existing structures, and eviction is done only to newly constructed structures in disputed areas, that too after following due process of law, and hence people should not panic.”

Arunachal Pradesh IGP (Law & Order) Chukhu Apa and his Assam counterpart Deepak Kedia stressed on proper coordination between both sides to ensure mutual understanding between the two states and seek a peaceful solution to such issues.

The meeting was also attended by the Papum Pare SP, officers of the forest departments of both the states, the ADCs of Yupia and Kimin, EACs and COs. (DIPRO)