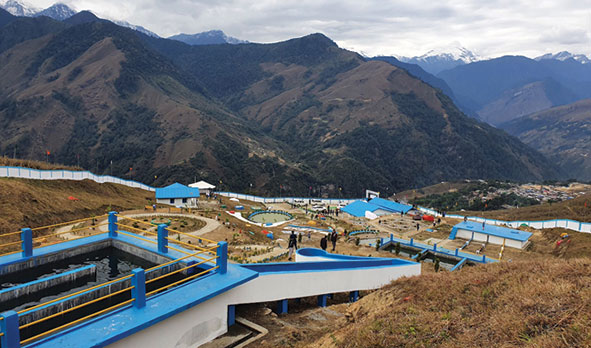 He also inaugurated the water treatment plant of the PHED and the water distribution system for Monigong township, worth Rs 13.5 crores, and laid the foundations for a new academic block at the government secondary school here and a veterinary aid centre in Pidi.

Khandu, who is on a three-day visit to Shi-Yomi, gave assurance that the government is committed to fulfil all the requirements of the newly created district, which, despite having immense potential in terms of tourism, has almost remained untouched due to communication bottleneck.

“Earlier, schemes and projects were mostly concentrated to certain districts and areas. But in the last five years, we have ensured equitable distribution of all schemes. Today, all so far neglected areas are reaping benefits of all central and state government programmes and schemes,” Khandu said.

He informed that at least 11 big and important projects have been approved and sanctioned for Shi-Yomi since he became the chief minister. These projects, he said, are in various stages of implementation.

The CM urged the people to cooperate with local legislator and Legislative Assembly Speaker PD Sona for overall development of the district.

He welcomed the demand for inclusion of Pidi and Monigong circles in the official tourist circuit of the state. “Tourism has immense potential here. I am in touch with the BRO for early completion of the highway to the district. Once this road is complete and other district roads improved, Shi-Yomi will be one of the most sought after tourist destinations of the state,” Khandu said.

Expressing concern that Monigong circle is yet to get mobile connectivity, Khandu assured to have 4G mobile towers installed in the area in the coming days.

“The central government has approved installation of 980 4G mobile towers in border areas of Arunachal Pradesh. Tender for the same has been done and work would begin soon. I assure few of these towers will be installed here in Shi-Yomi,” he said.

Khandu also announced various projects worth Rs 3.5 crores under the Pradhan Mantri Jan Vikas Karyakram for Shi-Yomi, besides Rs 4 crores each for establishment of two model schools – one in Monigong and the other in Dechenthang – under the state government’s flagship programme ‘Mission Shiksha’.

Responding to a memorandum containing five demands, including construction of circuit houses in Monigong and Pidi, a general ground in Pidi and a mega hydropower project, besides inclusion of Monigong and Pidi in the tourist circuit, Khandu said that all demands would be taken care of.

He informed that two mini hydel projects for the district are already in the final stages of approval.

“To your request for a mega hydropower project in the area, I will direct the hydropower department to do a survey and submit a detailed study report to the state government for further decision,” the CM added.

On his way to Mechukha from Monigong, Khandu inaugurated the newly established adventure park at the Chu-Pala river island.