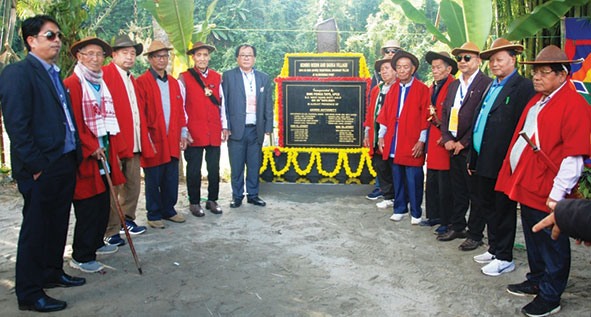 Addressing the gathering, the DC said, “There is nothing like settling the inter-village boundary, be it river, land or forest, through mutual trust and understanding. The boundary stone in the form of erecting a permanent pillar is simply a historic event and goes a long way in infusing the sense of understanding among the young generation in the years to come.”

He appealed to the public and the youths to “come forward with constructive suggestions in all development activities for overall welfare of the district,” and urged the gaon burahs to play a pivotal role in the justice delivery system at the grassroots level of administration.

Former minister Doi Ado and former MLA Gadam Ete, who were also present, said that “the historic event should erase the past conflicts of forefathers and help the younger generation delve into the beautiful works done by the present generation without leaving any conflict and confusion.”

Saying that the right message should reach those who could not attend the programme, Kombo ZPM Momar Lollen said that “the pillar has not been erected to demarcate people of the two villages but to incite unity and relationships.”

Highlighting the history of the river dispute between Kombo and Darka villages in the past, All Kombo Welfare and Development Society (AKWDS) secretary-general Kenba Diyum said: “The age-old dispute was amicably settled by then assistant political officer major PN Kohl and Indian Frontier Administrative Service officer by planting a tree on the demarcated site, and today the boundary stone is being put in the same place to settle it forever. The pillar is being erected on a mutual understanding basis in a bid to do away with any misunderstanding among succeeding generations.”

Among others, representatives of the AKWDS and the Darka Gida Isi Committee, HGBs, GBs, senior citizens and intellectuals of both the villages were present. (DIPRO)