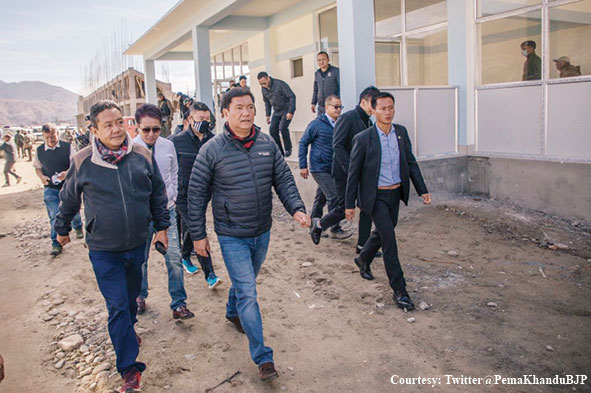 He advocated that government level negotiation is the only way out to resolve the long standing vexed boundary issue, while responding to media queries in Mechukha on the boundary skirmish in Kimin (Papum Pare district) area.

“The Assam- Arunachal boundary is not an international border like Tibet-China and Pakistan border, where the deployment and reinforcement of forces is required,” said Khandu, stressing that “the inter-state government level talk is the only way out to resolve the issue.”

“Recently, I saw a video on social media that Assam Forest officials came to Arunachal side and served a notice. I immediately spoke to Assam Chief Minister Himanta Biswa Sarma and we have decided that for such incidents, the cases will be dealt with by the deputy commissioners till the negotiation is finalised. We have also instructed the officials of both sides to maintain restraint,” the CM informed.

Khandu also disclosed that preparation of outside the court settlement on boundary dispute is going on and once it is finalized, he would sit with his Assam counterpart to resolve the boundary issue amicably.

“As of now, the Arunachal boundary issue is in the Supreme Court so we have decided to settle the dispute out of court. Preparation has begun from Arunachal’s side and I am hopeful that we will mutually settle the disputes, ” the CM said, stating that Arunachal shares a 730 km long boundary with Assam.

Khandu also informed that the center had asked all the chief ministers to resolve their inter-state issues amicably.

“In fact, the direction has been given by the prime minister a very long time ago and after Amit Shah took over as the Union Home Minister, he has directed all the chief ministers to settle it, ” Khandu added.

“The border issue is one of the burning issues as Assam has issues with other northeast states, including Manipur, Mizoram, Nagaland and Arunachal,” he said.

The reports of border skirmish between Assam Forest officials and the residents along Arunachal side of Kimin areas surfaced this week.

The National People’s Party also expressed grave concern over the unabated boundary issue and apprised the state government to resolve the issue.

On Tuesday, the Assam Police reportedly barged into houses at Rajali village in Dollungmukh of Kamle district. Villagers say that the Assam police had entered the village without permission from the Arunachal authorities.