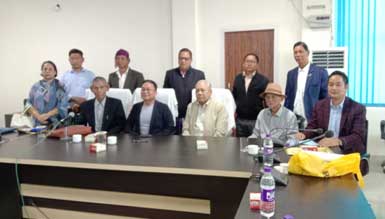 NAMSAI, 2 Dec: A research team from Rajiv Gandhi University, Doimukh organized an interactive session on ‘Unsung heroes’ with community-based organizations (CBO) and intellectuals at the DC office here on Thursday.

The state government has entrusted the research team, consisting of Prof Ashan Riddi, Tajen Dabi and David Gao, with the task of carrying out research and documentation on the unsung heroes of Arunachal Pradesh.

During the session, Prof Riddi said that the team is mainly focused on the freedom fighters. Stating that not a single personality from Arunachal has been recognized as a freedom fighter by the government of India, he said, “The team’s main motive is to research, document and validate those heroes who have actually fought for India’s freedom.”

Adding that the Tai Khamtis and the Singphos have rich traditions since time immemorial “and hence such personalities from the two communities have been mostly documented in many books,” he sought “support and active participation from CBOs, intellectuals, etc, to share documentary or material evidences in order to authenticate the stories on such heroes.”

Prof Riddi also informed that the team plans to carry out a detailed research very soon, based on the archives and evidence.

The representatives of the CBOs provided preliminary documents to the team on personalities like Ranua Gohain, Ningroo La, and many others.

The DC was also present at the session.