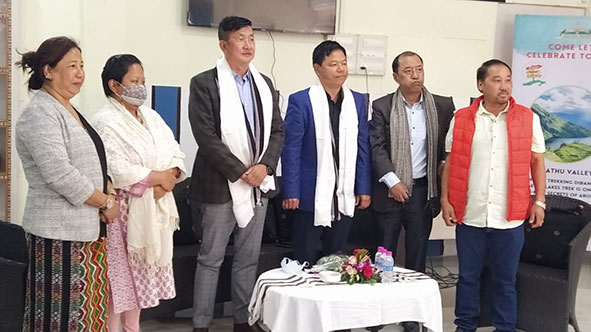 ITANAGAR, 3 Dec: Tourism Minister Nakap Nalo on Friday called for “concerted efforts amongst all the stakeholders for successful implementation of tourism programmes and policies in the state.”

Attending an interaction programme with stakeholders, including tour operators, homestay owners, officials and others at the State Food Craft Institute (SFCI) near IG Park here, Nalo said, “Though Covid-19 pandemic has hit the tourism industry all over the world, the state needs to build up a strong team to restart the tourism activities in full swing.”

The minister suggested “building permanent roadmaps to implement tourism projects in the coming days,” and encouraged the tour operators to take over the non-functional assets created by the tourism department.

Nalo also suggested organizing workshops “like the one that was organized at the Responsible Tourism Conclave, Namsai by Outlook Group.”

Advisor to tourism minister, Laisam Simai asked the participants to “drop the misconception of building tourism infrastructure like constructing lodge, wayside amenities, etc,” and advised them to “focus on human resources development and other result-oriented activities instead.”

Asking the tourism officials to be more proactive, he called for “investing and focusing on potential areas, instead of investing everywhere.”

Tourism Secretary Sadhana Deori suggested conducting familiarization tours for the state’s tour operators to other NE states, and suggested “putting more leverage on places which are yet to be explored.”

Tourism Deputy Director Bengia Manna Sonam called for holding “DTOs’ meet on a zonal basis, so that all DTOs can take part in developmental activities.”

She emphasized on holding coordination meetings with the departments of art & culture, environment & forest and research “for streamlining tourist products in tourist interest places within the state.”

Arunachal Pradesh Tour Operator president John Panye called for “inclusion of tourism stakeholders in the district tourism promotion council for effective functioning within the district.” He also suggested promoting places that have not been properly promoted.