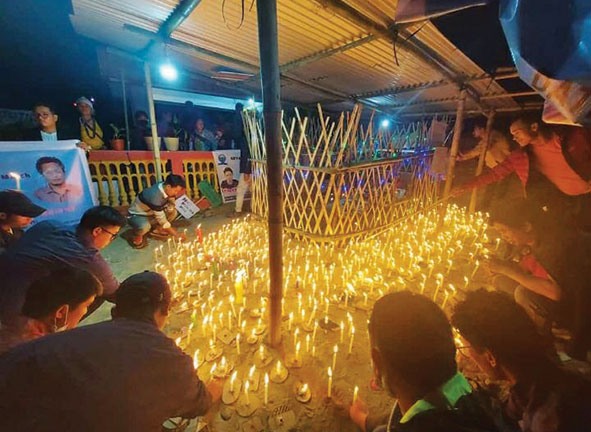 NIRJULI, 5 Dec: Hundreds of people took out a peaceful candlelight march on Sunday evening, seeking justice for Licha Tania, who died on the spot after a speeding car rammed into his scooter on the road between Bage Tinali in Nirjuli and the Dikrong bridge on the night of 30 November.

The march, organized by the Licha Welfare Society, began from Huto English School, Nirjuli and ended at the residence of Licha Richo (the deceased’s father) in Lekhi village.

All Nyishi Students’ Union assistant general secretary Licha Saha said, “We condemn such a criminal activity of drink and drive.” He said that the marchers’ primary demands are capital punishment for the culprits and denial of bail to the culprits until their trial.

“In present days, many youths follow drink and drive technique as a way of enjoying life, which is not safe. Therefore, the motto of the rally is also to provide awareness message regarding drink and drive,” Saha said.

He informed that the culprits have been arrested by the police, and said, “We believe that the law will provide justice to late Tania.”

Members of the All Yachuli Students’ Union, the SEYA Youth Club, the All Jotam Joram Youth Welfare Association, the SEYA Welfare Organization and the Neelam Youth Club, along with several others participated in the candlelight march and paid their last respects to the departed soul.