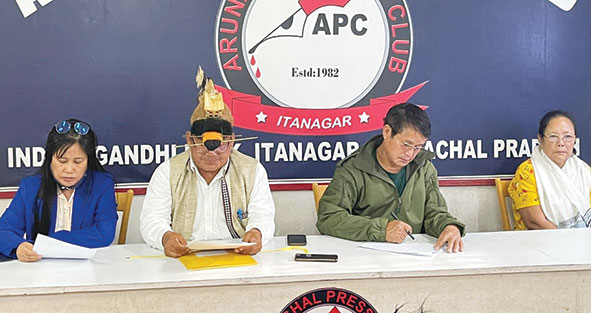 In a press conference at the press club here on Sunday, AAPFSDWA general secretary Tarh Miri said that “DC Talo Potom has overstepped his jurisdiction without referring the complaint to the state level monitoring committee.”

Miri claimed that the association has records of the DC’s correspondences with his counterparts in adjoining districts, the Food Corporation of India and the food & civil supplies director, “alarming the inflow of illegal storage of PDS rice in Itanagar Capital Region from the neighbouring state and the districts.”

On the basis of the IMACR’s allegation that fair price shops (FPS) were selling free rations to private shopkeepers, Potom, along with volunteers of the IMACR conducted raids on Friday and sealed two FPS’ – M/s Nabam Lania Fair Price Shop in Nirjuli and M/s Punyo Laling FPS in D Sector, Naharlagun.

Outraged at the administration’s raids and sealing of the FPS’, the AAPFSDWA termed the action unnecessary harassment of FPS dealers.

“If you have right intention, you can direct the police check gates at Banderdewa, Gumto, Kola Camp and Hollongi, instead of selectively harassing non-tribal FPS dealers and shopkeepers at the behest of some mischievous individuals with malafide intention to settle their personal grudges,” Miri said.

The FPS dealers’ association further said that the FPS dealers are subjected to physical and verbal abuse and forcible donations by various self-styled and unregistered organizations.

“Despite the FPS dealers’ giving selfless service across the state, so many unauthorized individuals, non-registered organizations and unions continue to harass the FPS dealers for free rice and forceful donations. The FPS dealers are subjected to frequent physical and verbal abuse, causing untold miseries,” it said.

The association threatened that the FPS dealers would surrender their licences to the government at one go as a mark of protest.

“If the trend of unnecessary harassment continues with the FPS dealers, we have no option but to surrender our FPS licences at one go,” it said in a statement.

Meanwhile, reacting to the AAPFPSDWA’s claims, the DC stated that the raids were carried out “based on evidences which are also available in the media.”

Potom denied that there was any malafide intention behind the raids. “One FPS, which falls under Papum Pare district, was informed to DC Papum Pare,” he said, adding that he has directed the food & civil supplies officer to submit a report, and that further action will be taken based on the report.