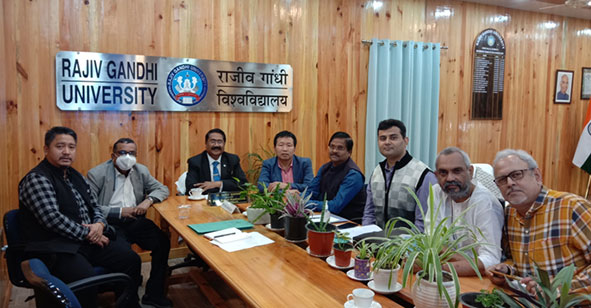 “The central government, in collaboration with the state government is all set to start the academic programmes in the new institute from August 2022, offering three bachelor level programmes with Rajiv Gandhi University’s (RGU) affiliation,” Dr Sharma said during a meeting with RGU Vice Chancellor Saket Kushwaha here on Monday.

A high-level team from Kolkata-based SRFTI, led by Dr Sharma, called on Prof Kushwaha and briefed him about the establishment of the film institute in Jote, in Sangdupota circle of Papum Pare district.

Prof Kushwaha expressed appreciation for the move of both the central and the state governments and advised the team to “work in line of improving the linkages holistically for mutual growth, benefitting each other, and for overall growth of media education system in the state.”

RGU Pro-VC Prof Amitava Mitra briefed the team on the technicalities involved in such ventures, and said that the state has huge potential in the field of media studies.

RGU Registrar Dr NT Rikam spoke about “the role of the university in shaping colleges producing human resources in the state through its academic contributions and administration,” the university informed in a press release.

It said that the NEFTI will initially be supported by faculty members from RGU’s departments of mass communication, electronics & communication, and fine arts & music.