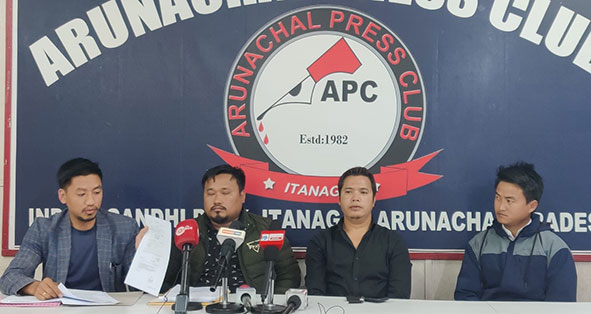 The bandh will be in place from 5 am to 5 pm, right from Sede village along the East Kameng district boundary up to the Papum Pare boundary.

Milk van, media personnel, schoolchildren attending examinations, magistrate and ambulance will be exempted along NH 13 during the bandh hours, the APKDSU said.

The union is demanding that the authorities immediately reconduct the examination for the four contractual posts, besides immediate transfer of the DMO and the DRCHO from the district.

Gumro appealed to the people of Pakke-Kessang and the commuters of neighbouring districts, such as East Kameng, West Kameng and Tawang, to cooperate with the union during the bandh hours.

“We are not fighting against any individual; rather, we are against job anomalies in the district health department,” the APKDSU president said.

APDKSU vice president Thomas Nabum claimed that, when a joint representation was submitted to the Pakke-Kessang DC, who is the chairman of the District Health Society, the DC had assured them that the interview would be re-conducted. However, it did not happen.

“We are declaring the bandh call because the authorities are not taking us seriously,” said Nabum.

The health & family welfare secretary had allocated the four contractual posts in the district on 29 August. The secretary clearly specified that “the mode of the recruitment would be written examination, followed by viva voce.”

However, the union said, on 11 August, even before the posts had been sanctioned, DMO Dr Yagling Perme issued an advertisement inviting candidates serving as block account manager, block data manager and block community manager presently working under the National Health Mission (NHM) and fulfilling the eligibility criteria for promotion as DPM, DAM, DOM and DCM on contractual basis.

The union said it suspects a scam as Dr Perme issued the advertisement even before the posts were officially sanctioned by the health secretary.

In his response to the APKDSU and the Pakke-Kessang District Intellectual Forum on 16 November, Dr Perme had shifted the responsibility to the NHM mission director, and stated that “the posts were not altered because lower post has been promoted to upper post,” the union said.

“Pay ranges were also not altered because lower post pay range is given in the advertisements as per approval of NHM, government of Arunachal Pradesh,” Dr Perme had stated.

“Contractual staffs may be promoted if vacant posts are available, as per their eligibility and fulfilment of criteria for appointment,” he added.

However, NHM Mission Director CR Khampa denied the DMO’s claims and stated that the contractual posts under the NHM do not have promotional posts and the particular posts allocated to Pakke-Kessang district were for direct recruitment.

The Arunachal Times sent queries to Dr Perme, but he did not respond.