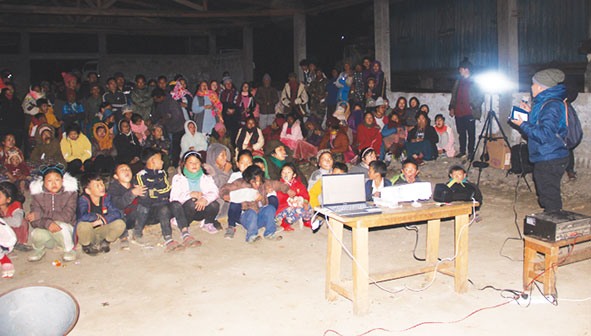 TAKSING, 7 Dec: An outreach programme on ‘Awareness of mother tongue’ was conducted by a team of Rajiv Gandhi University’s (RGU) Centre for Endangered Languages (CFEL) for the Nah-Tagin community of Taksing, the last administrative circle of Upper Subansiri district, on Monday.

The programme, conducted in collaboration with the North Eastern Council, was part of the month-long field research under

the ongoing project on ‘Documentation of endangered language, oral narratives, and cultures of lesser-known tribal communities of Arunachal Pradesh’.

The research team consists of four research associates. A documentary on the Tangam language, Ngok Miri Dekke Yoyo Gaga Goktuanam Kiding (Those Songs and Lullabies I Used to Sing), directed by Kombong Darang and produced by the CFEL, was screened at the community hall here.

During the programme, Dr Tame Ramya Tarh spoke on the importance of mother tongue and the need to preserve one’s language and cultural heritage. Citing “the factors of language vitality, ie, domain of language use, language attitude, and intergenerational transmission,” he urged the native speakers to keep their language intact and transmit it from the current generation to the next.

Tache Chader, on behalf of the Nah-Tagin community, expressed gratitude to the research team for organizing the programme.

Nah is one of the lesser known languages under the Tagin ethnic identity of Arunachal Pradesh. This speech variety is spoken in around 10 villages, including Taksing Model Village, in Taksing administrative circle.

The UNESCO’s Language Vitality and Endangerment Framework (2003) classified the Nah-Tagin language as a ‘critically endangered language’ on the basis of a smaller number of speakers.

“The 2011 census records the Nah-Tagin population to be 586. Their culture is on the verge of extinction since a majority of the community members is slowly denouncing their ancestral customs, traditions, and belief systems,” a release added .

RGU Vice Chancellor Prof Saket Kushwaha met with the researchers before their departure on 27 November.