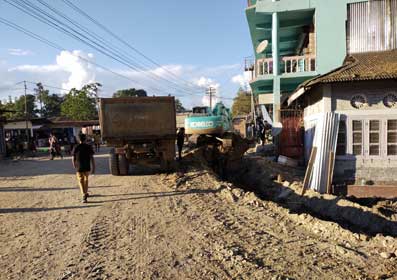 The ministry under its North East Road Sector Development Scheme has sanctioned Rs 42.27 crore for complete restructuring of the 15-km long MMJ road from Mirem tinali to Ruksin check gate of which, Rs. 15 crore was released as first installment.

The road construction project had earlier faced delay much to the concern of the local MLA and locals of Pasighat West area. Moreover, construction activities at the initial stage were halted for some months following a contention between the PWD officials and MMJ Road Construction Monitoring Committee (MMJ-RCMC) over quality of works.

Later, the row over road work was resolved by interference of higher ups of the state PWD, who urged the work executing firm (M/S Puna Hinda Company) to maintain the quality of road work.

Presently, men and machines of the executing agency have been deployed in road construction works along MMJ road. The members of MMJ-RCMC and local leaders are helping the agency to take up the road work on a war footing.

Meanwhile, Pasighat West MLA Ninong Ering has appealed to the locals to cooperate with the implementing agency so that it can complete MMJ road works within the stipulated time.

“Once the two-lane inter-district road is completed, the rural people of Mirem, Bilat and Ledun area of East Siang and Koyu circle of Lower Siang district will gain many privileges in surface communication,” said Ering.