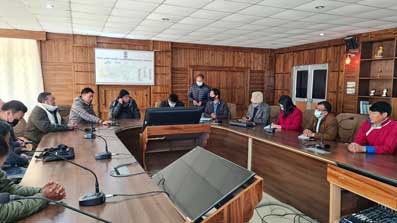 A meeting in this regard was held in the conference hall of the Tawang DC here on Thursday.

Chairing the meeting, Tawang DC Sang Phuntsok said that the government has initiated a project called ‘Unsung Heroes of Arunachal Pradesh’ to give proper recognition to the local freedom fighters and document the contributions made by them.

He urged the participants to share views and opinions on the freedom fighters from Tawang with the visiting team.

Coordinator of the team prof.  Singh said that there are four teams constituted for the purpose to cover the entire state, who will be conducting research, collecting oral tradition evidence and validating those from archives before submitting the names to the government for due recognition.

“The research team has already started their work in this regard and shall keep on collecting all the information and validate those with available evidence and archives,” he said.

Former minister Thupten Tempa shared some information regarding the role of his father late Rinchin Dhondup, popularly known as Ngyerpa Khou and his contribution as political assistant with Major R. Bob Khating.

Tawang unit of  IFCSAP’s president Nawang Norbu suggested that more names should be included in the research for documentation so that no deserving person is left out in getting due recognition for their service to the country.