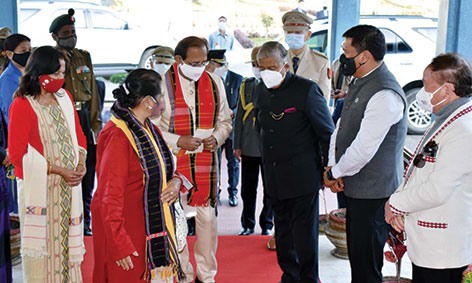 ITANAGAR, 31 Dec: Assam Governor Jagadish Mukhi, who is on a four-day tour of Arunachal Pradesh, arrived here on Friday.

Mishra expressed hope that Mukhi’s maiden visit to the state would further cement the age-old cordial relation between the two neighbouring states.

“Reinforcement of the goodwill amongst the people of Arunachal Pradesh and Assam will boost socioeconomic development in the region and also secure the territorial integrity of the nation,” he said.

The two governors are scheduled to visit Kaho, the last Indian village in Arunachal along the international border, on New Year’s Day and interact with the locals and the jawans guarding the frontier.

One of the seven villages in Kibithoo block of Anjaw district, Kaho had weathered a Chinese attack in the 1962 war. Its residents had assisted the outnumbered Indian soldiers. (Raj Bhavan)