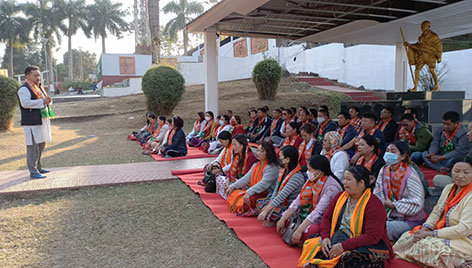 ITANAGAR, 7 Jan: The state BJP on Friday staged a sit-in protest at Niti Vihar here over the lapse in the prime minister’s security during his recent visit to Punjab.

Addressing the party workers, state BJP vice president Tarh Tarak said that “serious security lapse during the visit of prime minister in Punjab is highly condemnable by every section of society. Such incident should not happen to any prime minister from any political party in future.”

Tarak added that “several programmes have been planned to condemn the said incident for next few days.”

State BJP Mahila Morcha president Higio Aruni also expressed unhappiness over the incident. “It needs to be condemned by every section of society,” she said.

Among others, state BJYM president Ram Tajo took part in the protest.