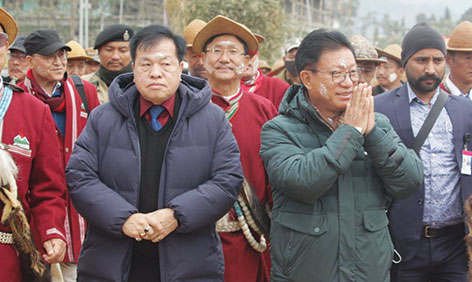 DAPORIJO, 7 Dec: Education Minister Taba Tedir said that his department has approved introducing Tagin as a third language in the schools in Upper Subansiri district.

Stating that the education department has approved the Tagin language book prepared by the Tagin Cultural Society, Tedir asked the Upper Subansiri DDSE to introduce Tagin as a third language in all schools.

Saying that “the sole motive of creating the department of indigenous affairs is to protect and preserve the age-old culture and traditions of the people of the state,” the minister urged the people of the community to protect, preserve and promote their rich cultural heritage.

Tedir said that the indigenous affairs department has sanctioned Rs 33 lakhs for the celebration of Si-Donyi in Upper Subansiri. He also informed that the state government has approved honorarium for 183 priests and it will be disbursed soon.

Earlier, Tedir released a chronicle of the Si-Donyi festival prepared by the festival celebration committee chairman and its secretary Reri Tago Dulom.

PWD CE (C/Z-A) Hage Appa was all praise for the Tagins for their fluency in their mother tongue, and appealed to the parents to educate their children about their own culture and traditions.

Appa appealed to the people to “cooperate with the Arunachal Indigenous Tribes Forum working for unity and promote brotherhood among the indigenous people, amongst others.” He also urged the people not to mix religions with festivals.

Local MLA Taniya Soki said that Si-Donyi is celebrated not only for a bumper harvest but also for prosperity and wellbeing of the people.

“Without wish of the Si-Donyi, nothing is possible to achieve,” he said, and appealed to all sections of the society to have faith in Si-Donyi.

Display of kony bokar (war dance of the Tagins) was one of the main attractions of the celebration. Thirty-two food stalls along with seven emporiums were set up at the venue.