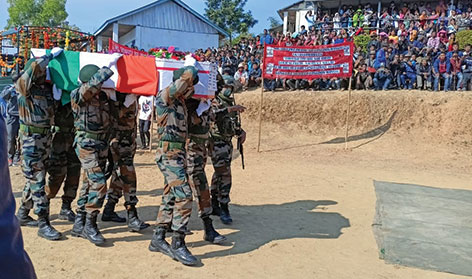 NIAUSA, 7 Jan: Rifleman Longdon Wangsu of the 16th Assam Rifles (AR), who was martyred in the line of duty in Manipur, was laid to rest at his native village here in Longding district on Friday with full military honours.

The AR’s Longding battalion presented a guard of honour and gun salute to the martyr.

25 Sector Assam Rifles Commander Brig Vijay Chahar, along with the rank and file of the AR’s Longding battalion paid tributes to the brave soldier.

The Longding AR battalion also offered all possible assistance and support to the late soldier’s family.

Chief of Niausa and former minister Thangwang Wangham offered heartfelt condolence to the bereaved family, and thanked the commanding officer of the AR in Manipur, who arranged to airlift the mortal remains of martyr Wangsu.

Governor BD Mishra has mourned the demise of rifleman Longdon Wangsu while on duty.

In a condolence letter to Wangsu’s widow Chumki Wangsu, the governor said: “In the death of rifleman Wangsu, the people of Arunachal Pradesh have lost a brave son and the Assam Rifles has lost a valiant combatant. His sacrifice in the line of duty will be an inspiration for the youths of the state to emulate.”

Conveying heartfelt condolence to the bereaved family, the governor prayed for eternal peace of the departed soul. (With DIPRO and Raj Bhavan inputs)