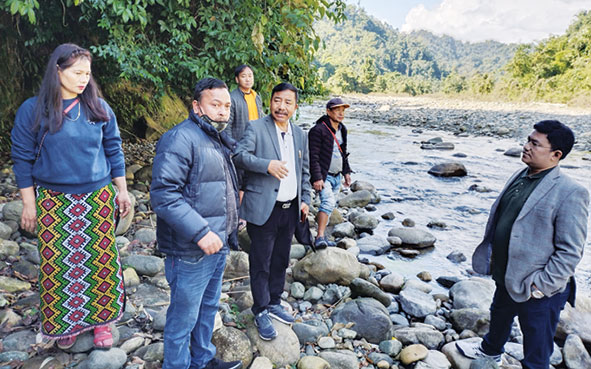 PASIGHAT, 28 Jan: The Brahmaputra Board (BB) – a technical department under the union jal shakti ministry – started survey for its proposed anti-erosion project at the Remi river in East Siang district on Friday.

The project site along the river covers Mirem, Miglung and Remi villages in Bilat circle, besides villages in Mangnang, Baromile and Oyan in Sille-Oyan circle. The project is aimed at protecting fertile croplands and public properties from flood and soil erosion caused by the Remi river.

The board’s Itanagar Regional Office Head Gamno Kamki, accompanied by EE Migo Basar and two others on Friday visited the Mirem, Remi and Oyan portions of the Remi river and identified the “strategic sites for conducting technical surveys.”

In April last year, a three-member team of BB engineers, headed by Kamki, had visited different portions of the river. The engineers had assured to submit a detailed project report to the jal shakti ministry after conducting the final survey, but could not do so due to the Covid-19 situation.

Kamki informed that he has entrusted two engineers with the task of carrying out the technical survey. The engineers will collect all profiles of the river and gather geographical information regarding the project site.

Kamki and his team have identified the vulnerable sites, including Zero Point at Sibe-Raglong (Mirem), the Miglung bridge point, the trijunction of the river (Marbang, Minggo and Remi) near the Remi RCC bridge, Yeken-Piigo (Oyan) and Moinaguli (Kemi) along the river.

“Pasighat West MLA Ninong Ering had moved the jal shakti ministry to cover his area with anti-erosion projects while he was serving as union minister of state for minority affairs. The MLA has also approached the board engineers and maintained all cooperation for conducting the preliminary works,” Kamki said.

Ruksin ADC Tajing Jonnom, who assisted the BB engineers, urged the local villagers to “cooperate the board for successful implementation of the proposed anti-erosion project.”

Ering, who had met the BB engineers last year, requested them to expedite the official procedures to get the project sanctioned at the earliest. He sought a project worth not less than Rs 300 crores, so that it can cover all the vulnerable areas along the Remi riverbed.

The Remi river, flowing down from the hills in Mirem, causes flooding on both sides of its banks every year during monsoon. It has already swallowed several acres of cropland and horticulture gardens in Pasighat West area.