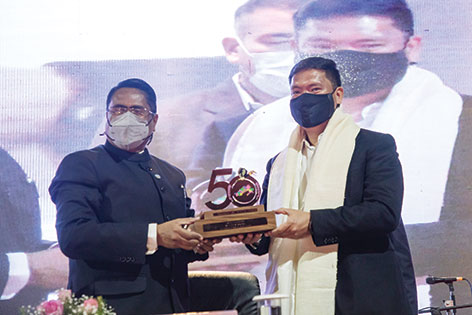 ITANAGAR, 18 Feb: Arunachal Pradesh was accorded statehood in 1987, before it had actually matured enough, said Chief Minister Pema Khandu on Friday, adding that the state could have continued as a union territory (UT) for a few more years.

The CM was speaking at a symposium on ‘Youth perspective on development and changes in Arunachal Pradesh in 50 years’, held here as part of the state’s golden jubilee celebration.

“The generations that had received education during the NEFA and UT times were really educated and the quality of education reflected in their services,” Khandu said. However, he said that, after Arunachal became a full-fledged state, the scenario changed.

“Hundreds of schools were established across the state but the quality in education dropped sharply,” he said.

He, however, added that “nothing would be achieved by pondering on what went wrong or putting the blame on any individual or political party,” and called for making the wrong right through administrative and political reforms.

“Since assuming the chief minister’s office, it has been my endeavour to bring in reforms with strong political will. Therefore, I had to take decisions which at times were frowned upon. One such decision was to establish the State Staff Selection Board,” he said.

This decision, Khandu said, broke the tradition of ‘job for vote’ and ‘job for cash’ prevalent across the state.

“Today, youths with merit and not those with connections are getting government jobs. In 5 to 10 years from now, government offices will be different altogether – more honest, more efficient and more responsible. You will see,” Khandu said.

The CM further said that there should be collective and continued efforts to strengthen the bond within the tribes of the state.

Citing the ‘Dekho Apna Pradesh’ programme of the state, Khandu said, “Youths need to travel to other districts. Know your state, take pride in the diversity, and then explore the world with your head held high.”

Khandu expressed hope that the symposium would raise important issues and come up with a way forward “with youths on the centre stage, upon which the government can build on.” (CM’s PR Cell)