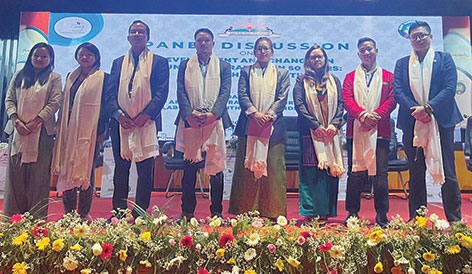 ITANAGAR, 18 Feb: As part of the state’s golden jubilee celebration, a symposium themed ‘Development and change in Arunachal Pradesh in 50 years: The youth perspective’ was organized on Friday at the Dorjee Khandu Hall of the legislative assembly here in collaboration with Rajiv Gandhi University (RGU).

Subject experts, ranging from academicians and journalists to practicing lawyers took part in the deliberations. The symposium was aimed at providing an academic platform to undergraduate students, postgraduate students and research scholars to make them aware of the rich heritage of Arunachal Pradesh, and at encouraging them to carve a way ahead for the future of the state. It was also aimed at facilitating generation of ideas and engagement with existing ideas.

Participating in the discourse, Dera Natung Government College’s (DNGC) Hindi Assistant Professor Dr Taro Sindik opined that literature in Arunachal has taken a back seat in 50 years of the state’s journey, unlike other sectors.

“In 50 years, though other sectors must have changed a lot, literature has taken a back seat in Arunachal,” said Dr Sindik.

“We are reading foreign literature in our universities and colleges; we do not read our state’s oral literature,” he said, and urged the youths to read their own literature to understand their own state in better ways.

“When we are celebrating our state’s 50 years and mapping the journey of our state, the celebration will not be complete unless we take into account our literature. No society can be completely comprehended if we leave literature out,” Dr Taipodia said.

“Literature is a mirror to ourselves, but literature is also a memory of our past, our ancestors, our roots and also have envisioning our future. Now time has come we need to encourage our literatures and read our writers’ books,” she added.

She said that tribal women in Arunachal are being marginalized because they do not have the right to private properties or ownership of land.

“The idea of tribal culture is itself hooked on a patriarchal setup. It is only about a man,” Modi said.

Speaking on the topic, ‘Social media versus mass media: Transition and future perspective’, senior journalist Ranju Dodum said that both must exist together.

“The advent of social media brings democratization of journalism,” he said, adding that “there is nothing wrong in the growth of overnight journalists, provided the media put out good contents and sensible news, rather than jingoist contents.”

“What is wrong in asking questions? The day you start regulating news, it would be not less than the media situation in the Middle East and communist China,” Dodum said.

He also opined that the media need to equip themselves with better tools and greater skills and present news in a manner that audiences and readers are willing to take.

DNGC’s Botany Assistant Professor Ajum Bagang drew attention to the rampant devastation of biodiversity in the state. She cautioned that exploitation of natural resources, urbanization, and deforestation are great threats to the state’s rich biodiversity.

“The youths should be concerned over the unabated earth-cutting in and around the Itanagar Capital Region,” she said.

Advocate Reken Ingo deliberated on the topic, ‘Students politics in Arunachal Pradesh: Their roles and impact’.

In her deliberation on the topic, ‘Regaining self-sufficiency in agriculture post Covid realization,” RGU’s Agricultural Science Assistant Professor Dr Pema Khandu Goiba said that “self-sufficient is the only way to face Covid-19 like situation by focusing on agriculture sector.”

Earlier, Legislative Assembly Speaker Pasang D Sona in his speech stressed on the responsibilities of the youths in shaping the state and the nation. He said that the state government is focusing on quality human resource, and highlighted the CM’s reformative steps like streamlining of the Arunachal Pradesh Public Service Commission and establishment of the APSSB.

“Youths are the future of the state and you have lots of responsibilities. Don’t only depend on government; commitment and dedication from youths are expected,” Sona said.