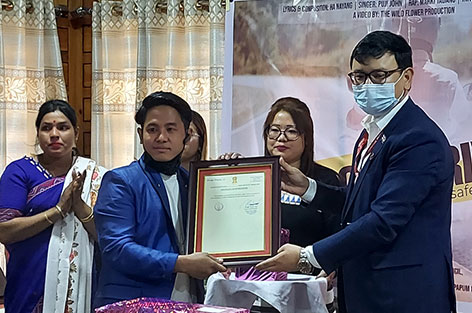 YUPIA, 18 Feb: The Papum Pare district transport office on Friday released a Nyishi audio album, ‘The Good Driver,’ as part of the National Road Safety Month observation in the district.

Releasing the album during a traffic awareness programme here, DC Minga Sherpa said that it would go a long way in creating awareness on road safety measures among the people.

He also spoke on the importance of road safety measures and the need for creating awareness among the youths.

The DC felicitated composer Ha Nayung, singer Puji Johny and rapper Marki Tadang, who were instrumental in creating the album.

DTO Yajum Lombi Yumlam informed that the idea of making the album in the Nyishi language “is to draw maximum attention of local people towards road safety and safe driving, which are very important to reduce road mishaps.”