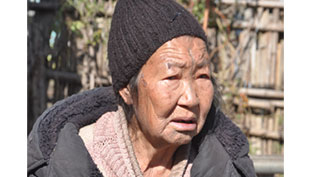 ZIRO, 28 Feb: Lod Yaming, the first woman zilla parishad member (nominated 1992-2003) of Lower Subansiri district, passed away in a hospital in Guwahati (Assam) on 27 February after a brief illness.

Daughter of late Koj Tangu and late Koj Biini (Nada), she was 85 years old. Her last rites will be held here on Tuesday.

Known lovingly as ‘Atta Yaming’ and ‘Baido Yaming’, late Lod Yaming was a social activist and a first-generation politician who had the distinction of being the first woman nominated ZPM of the district.

Born and brought up in a typical remote village in the early 1940s, when women hardly thought about life beyond their family affairs, she had the zeal and the inquisitiveness to learn about the world outside.

As a curious child, she learnt to speak Assamese and Hindi while tagging along with her uncle, who used to work as a helper in the house of a government representative from Assam.

In those days, for the outsiders, someone fluent in Assamese and Hindi was of great help in communicating with the local people. Late Yaming became a translator for officers on their visits to Ziro, although she was in her early teens.

From 1956 onwards, she went on to assist the then BDO of Ziro-I block in implementing all development schemes in Ziro. Later, she became the youngest executive member of the project implementing committee of Lower Subansiri district.

She was instrumental in setting up a project implementing centre in Reru village, where young girls were trained in weaving, knitting and traditional weaving.

Yaming was also selected for Home Guard training in Tezpur (Assam) in 1963. After completing the training, she was selected as the group leader, and she imparted training to young Nyishi and Apatani girls in the villages.

An iron-willed woman, far ahead of her times, she dared to set foot in the men’s domain and worked for the uplift of the womenfolk and the society.

After being selected as the anchal samiti member (ASM) of Dutta village in 1965, she raised a strong voice against child marriage and tattoo marking of girl children. Her grit and determination finally led to a consensus among the old and the young people to stop these practices and impose a fine of Rs 50 on those violating the decision.

She continued to serve the people in the capacity of ASM till 1991, and implemented all the developmental programmes of the government.

In 1992, she was nominated as a ZPM, and continued to serve the people in that capacity till 2003.

In 1993, she was awarded a silver medal by the government of Arunachal Pradesh for her meritorious service and dedication towards public welfare.

She was also the vice chairperson of the Khadi & Village Industries Commission from 1987 to 1990, a member of the Telecom Advisory Committee of Arunachal Pradesh Telcom SSA from 1994 to 1996, and a vigilance committee member (labour & employment) in 1996.

In the latter half of 1993, Yaming was appointed as the general secretary of the Mahila Congress Committee for Lower Subansiri, and held the post of the president of the Arunachal Congress District Women Front till 2003.

She was appointed as an executive member under the social welfare & child development department in Naharlagun. This committee was responsible for functionalizing the Juvenile Justice Board/Child Welfare Committee.

A founding member of the Apatani Women Association, Ziro, in 2015, she was a member of the advisory board till the time of her demise.

Late Lod Yaming was an illustrious octogenarian mother, a social activist, a politician and a torchbearer of women empowerment in the Apatani society.

Meanwhile, the  Tanw Supun Dukun (TDS) deeply mourned the demise of Yaming and conveyed heartfelt condolences to the bereaved family.

“She was a torchbearer of women empowerment and other social activities in the Apatani society in particular and the state in general. With her demise, the society and the state have lost a great philanthropist and social activist,” the TDS said. (DIPRO)