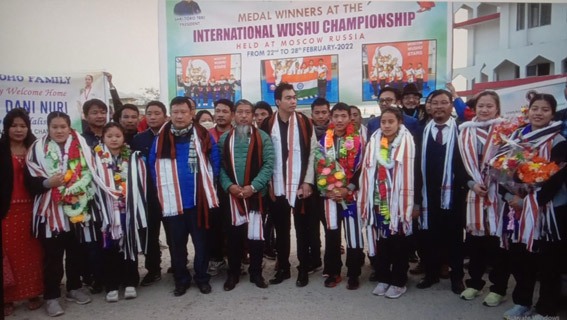 ITANAGAR, 2 Mar: The wushu players from Arunachal got a rousing reception upon their arrival at the Naharlagun Railway Station from their memorable campaign in the Russian capital city of Moscow.

The players won the hearts of the people of the state for their outstanding performance in the International Moscow Wushu Stars Championship.

They clinched nine medals, including five gold medals in the championship.

AAPWU president Toko Teki expressed his immense happiness over the brilliant performance of the athletes in such a major global event.

Teki said that the players performed up to the expectation. He credited SLSA Wushu Coach Maibam Premchandra’s hard work for the achievement.

Sports Director Tadar Appa also congratulated the medal-winning players and assured them all basic requirements to enhance their performance.

Appa was also all praise for Premchandra, the man behind the development and popularization of Wushu in Arunachal.