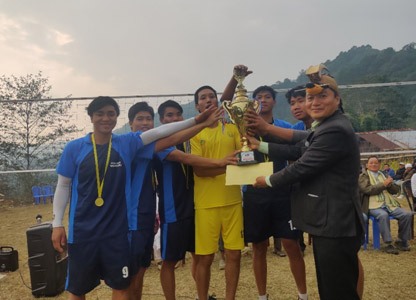 PALOVE, 5 Mar: A volleyball tournament was organised in memory of social worker Anya Tok on her first death anniversary at Palove village in Pakke-Kessang district on Saturday.

The tournament was inaugurated by MLA Biyuram Wahge, in the presence of Deputy Commissioner Tayek Pado.

Ten teams from Pakke-Kessang and other districts participated in it.

Earlier, the DC inaugurated a community park named Shantivan Park, in memory of Anya Tok, Shalo Tok and Karlom Tok, who were the parents and relatives of PHE&WS SE Tayum Tok.

Anya Tok and her husband Shalo Tok, who was a former GB, were social workers and pioneers of the indigenous faith movement in the state.