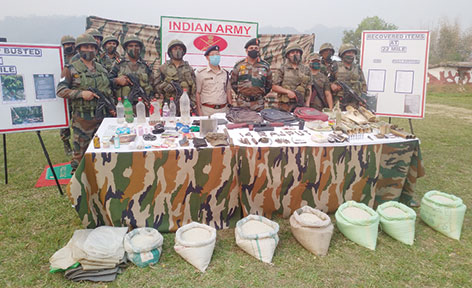 MIAO, 19 Mar: The Lekhapani battalion of the Indian Army and the Changlang police busted a major hideout, believed to be of the NSCN (K-YA), in the Namdapha National Park (NNP), around 35 kms from the Miao-Vijaynagar road in Changlang district, and recovered arms, ammunitions and explosive materials.

Based on a specific input, the army and the police launched a joint operation in the park area. However, sensing the presence of the security forces, the NSCN (K-YA) operatives managed to escape under the cover of the thick forest.

They left behind an AK 56 rifle with magazine, 46 rounds of ammunition, 800 gms of explosive and IED materials with cordex and detonators, Myanmarese currency, and various other contrabands. Approximately one quintal of locally-grown rice was also recovered from the hideout.

As per information from different sources, around 30-40 operatives were taking shelter in the camp for training and ‘administrative setup’.

“The operatives in the camp were hindering free movement of locals and creating nuisance for the common populace by using them for carrying out extortion, and were disrupting peace in Changlang district,” the security forces told this correspondent.

The army said it foiled a possible attempt to attack by the outfit after the recovery of the explosive materials.