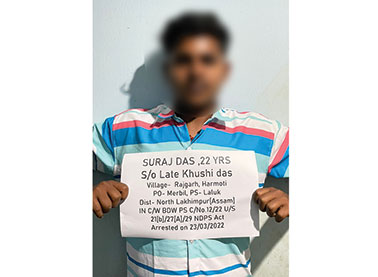 The police claimed that 80.20 grams of heroin have been seized from Das’ possession.

A team of police, comprising DSP Dekio Gumja, Naharlagun PS OC Inspector Khiksi Yangfo, Banderdewa PS OC (in-charge) Inspector Minli Geyi, SI SS Jha, and others, laid a trap and arrested Das at around 9:40 pm, when he came to a hotel in Banderdewa to sell the drug, the police informed.

The police said that Das is a habitual offender who had earlier been arrested in connection with Nlg PS Case No 73/21 u/s 21 (b), NDPS Act, in May 2021, and that the case is presently pending trial.