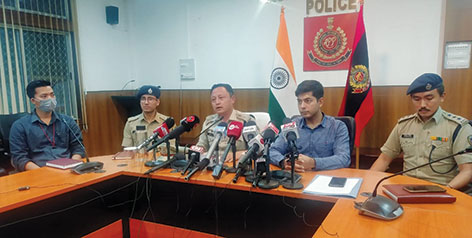 ITANAGAR, 7 Mar: Three persons, identified as Saddam Hussain (24), Ramzan Alam (24) and Md Ashik Hussain (22), all from Bihar, were involved in the murder of IRBn SI Shibu George in his official quarters in SRPL Colony here on 31 March.

According to the police, the trio arrived at George’s house at around 9 pm and mercilessly killed him. The incident took place between 10:30 pm and 11:30 pm, the police said, adding that, after committing the crime, they fled on a scooter, first to Naharlagun, and later to Lakhimpur in Assam.

Saddam Hussain, who ran tyre shops in Jollang and near the Punjabi Dhaba in Itanagar, has been identified as the mastermind behind the crime.

“George had earlier helped Saddam in his business, and Saddam had to repay about Rs 2 lakhs to George,” ICR SP Jimmy Chiram informed media persons at the police headquarters here on Thursday.

Chiram informed that a forensic team was formed and, “through detailed inquiry, the police identified Saddam Hussain as the prime suspect.

“After three to four hours of manhunt, Saddam was arrested on 1 April from Lakhimpur district. The surveillance team informed that two of the accused had fled to Bihar,” Chiram said.

A police team along with an SIT team reached the Muzaffarpur railway station, where the duo was expected to disembark, but the two accused had deboarded at a different station, Chiram informed.

“From Lakhimpur, two of the accused, Ashiq and Ramzan, left for Bihar, whereas the main accused, Saddam Hussain, stayed back in Lakhimpur as he was planning to take his family along.

“Sensing the police’ presence, the duo fled to West Bengal. Later, with the help of the West Bengal Police, the duo was finally arrested from the Naihati police station on 6 April,” the SP informed.

All three accused are currently in police remand.

“Elaborate preparations were made to commit the crime, using the knife which was used in the tyre shops,” Chiram said.

A case under Section 302/201 of the Indian Penal Code has been registered at the Chimpu police station.