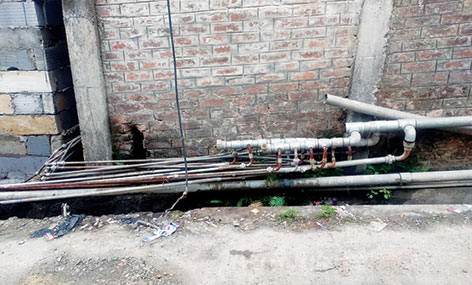 ITANAGAR, 10 Apr: The residents of several sectors and colonies in the Itanagar Capital Region (ICR), including Doimukh, are facing great hardship due to drinking water shortage.

While water supply in some areas of Abotani Colony in Itanagar got disrupted more than a month ago, the residents of many other sectors and colonies said that water is supplied for hardly half-an-hour to an hour daily in the morning, which they said is not enough.

The reporters of this daily on Sunday visited various sectors and colonies to learn about the drinking water problem.

Tadi Talo, a resident of Abotani Colony, said that water supply got disrupted in their area more than a month ago due to the construction of a new drainage system. He said that the department has provided a 60-metre-long plastic pipe to supply water to the veterinary hospital as it requires proper water supply. They have to connect the pipe on a daily basis when water supply is on.

Likha Yadik, who lives near the veterinary hospital, said that they have not been receiving water supply for the last one month.

“We have to go to distant places to fetch water from streams to meet the daily water requirement,” she said.

Bathing and washing clothes have also become a great problem due to the water shortage, Yadik said.

“On other days, we have to rely on laundry service and buy packaged water for drinking and cooking purposes,” she said.

The residents said that the government should provide drinking water “through water tank or a lorry, at least during the disruption period.”

Another resident, Godak Taja, said that the affected people may take to the streets if the water problem continues.

Momar Basar, a resident of C Sector, near UCO Bank, said that water is supplied to his locality for only 10 to 15 minutes in the evenings.

Water supply is not uniform in the entire ICR.

The residents of Mowb-II, near the PHED office, said that they get water supply on a regular basis from 5:30 am to 9:30 am, while the CRPF camp in Senki View gets 24/7 water supply.

It was also found that most of the residents have dug wells on their own due to frequent disruption of water supply.

The upper primary school in IG Park area dug a borewell a month ago.

Meanwhile, the residents of Doimukh Medical Colony are using stream water for daily use. It is also learnt that, although the PHED installed tap water connection last year, it is yet to be made functional.

Likewise, a water tank project under the Arunachal Pradesh State Livelihoods Mission, which was installed in the Rono ground area in Doimukh last year, too is not yet functional, said a resident near the ground.