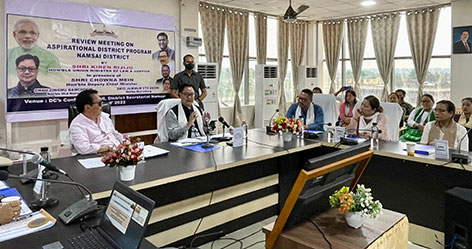 Chairing a review meeting on the ‘aspirational district programme of Namsai district’ here on Sunday, Rijiju said that Namsai has “made a transformational change in development over the last four years, which is the result of good leadership led by the deputy chief minister, dedicated team of

officers led by district administration, and judicious utilisation of funds.”

He congratulated the district administration for the remarkable improvement in the district’s ranking from 93rd to 14th in the overall ranking among the 112 aspirational districts in the country.

He further said that Arunachal can become “the highest per capita income generating state as the central devolution per capita to the state is highest in the Northeast,” and added that “the need of the hour is to enhance revenue generation in the local level.”

Rijiju appealed to the youths to channel their energy in positive directions and contribute to the development of the state.

“Arunachal is progressing in a very systemised way in every sector under the leadership of the chief minister and the deputy chief minister,” he said, and commended the DCM “for the presentation of a futuristic annual budget 2022-23 during the budget session.”

He informed that Namsai district received Rs 15 crores as award money from the NITI Aayog “due to its good performance in the delta rankings.”

He further informed that, in the health and nutrition sectors, the district has made a “substantial improvement from 42.16 to 79.40 during the period and secured first delta rank in 2020 and second delta rank in 2019.”

“The district had secured first delta rank twice in 2019 and 2020 in the education sector,” he added.