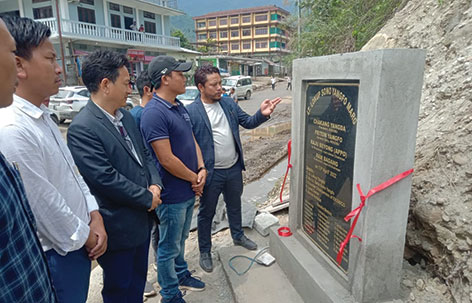 Late LS Yangfo was the first matriculate from the then undivided Kameng district. He was also the founding chairperson of the East Kameng Social Cultural Welfare Organisation (EKSCWO).

Speaking on the occasion, Yangda said, “Earlier, commuters used to travel inside the compound of the government higher secondary school, Bebo Colony, to reach Pacha Hydel Colony, creating an unsafe learning atmosphere. But now commuters can take this new alternative route without trespassing on the school compound.”

He remembered late LS Yangfo as one of the pioneers of East Kameng district, and expressed appreciation for the Yangfo family for donating the land.

Honipa, former protocol officer to late CM Kalikho Pul, lauded the AEKDSU for taking steps to save the school land from encroachers.

He said that his family would always be ready to contribute to the growth of Seppa town.