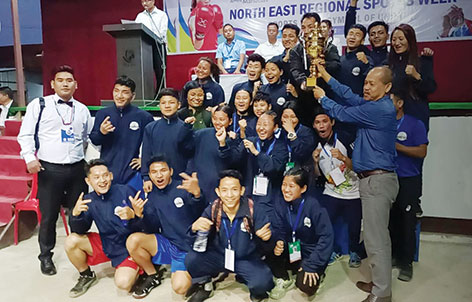 ITANAGAR, 2 May: Arunachal’s boxers bagged a rich haul of 17 medals at the North East Regional Sports Meet in Imphal, Manipur.

Heli Tana Tara, Taw Pakba and Karling Venia clinched a gold medal each, while Marge Gara and Gyamar Taba settled for the bronze in the finals played on Sunday.

Tara won the first gold for the state, defeating Lalmuankima of Mizoram in the 48 kg category by unanimous decision.

An aggressive Pakba outclassed Bahadur Pradhan of Assam in the 63 kg weight category to clinch the second gold.

Gara settled for the silver medal after losing a hard-fought final against Oinam Brandon of Manipur by split decision. He was declared the ‘best loser’ of the tournament and in the 70 kg weight category, as well.

Taba lost to Leimapokpam Rahul Singh of Manipur in the 75 kg weight category by split decision.

In the women’s section, Tagru Aper lost to Th Apsara of Manipur by unanimous decision, while Gora Yalung also settled for the silver after the match was abandoned due to injury.

In archery, Task Kara and Tang Suni lost to their opponents from Sikkim by 133-135 points in the mixed team event.

Meanwhile, Arunachal Pradesh were eliminated from both men’s and women’s football competitions.

In table tennis, Debolina Das entered into the semifinals after defeating her opponent from Manipur by 4-3 sets, while Sumesh Rinwa and Mamoni Taniang lost 2-4 and 0-4 to their respective opponents from Mizoram and Nagaland in the pre-quarters.

In badminton, Laa Talar will meet Bidyasagar Salam of Manipur in the men’s singles final.

Talar beat Sirzeet Maoirangthem 21-9 and 21-13 in the semifinal on Monday.

Talar, pairing with Pinky Karki, also reached the final of the mixed doubles, and they will play against K Dingku Sing and K Priya Devi of Manipur in the final.

The pair of Pinky Karki and Taring Yania reached the women’s doubles final, defeating Assam’s Manonta Kalita and Shibangi Baishya 21-11, 21-8 in the semifinal. They will meet K Priya and Ksh Maheswari Devi of Manipur in the final.

All the finals will be played on Tuesday.

Laa Robin lost 6-21, 8-21 to Bidyasagar Salam of Manipur in the men’s singles semifinal, while the pair of Bikom Boje and Charu Jaji lost 17-21 and 16-21 in men’s doubles semifinals.