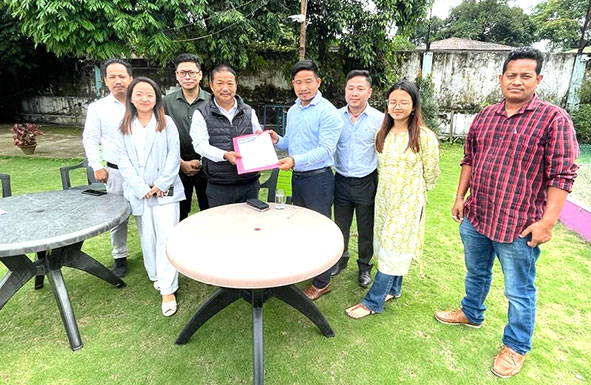 ITANAGAR, 3 May: A delegation of the Arunachal Pradesh Union of Working Journalists (APUWJ), led by its President Amar Sangno, on Tuesday called on Home Minister Bamang Felix at his official residence here and submitted a seven-point memorandum.

The APUWJ submitted the memorandum on the occasion of the World Press Freedom Day.

The memorandum included, among other things, request for enactment of a special law for the protection of journalists along the lines of the law enacted by the Maharashtra government; ensuring safety and security of the journalists in the state; life insurance scheme for accredited journalists; publishing the status of investigation of all the cases related to attacks on journalists; and ensuring justice for the families of the journalists who have been assaulted since 1980 in the state, without further delay.

The home minister on his part assured to pursue all the points in the memorandum, and reiterated the importance of a free press for a democracy to function.

The minister appealed to the press fraternity to ensure that journalistic ethics are upheld by all its affiliated members.

Expressing concern over the unregulated mushrooming of media houses in the state over the past few years, Felix suggested to the APUWJ to “work out modalities for ensuring healthy growth of journalism in the state.”

“The state government is committed towards the safety and security of journalists. But it is imperative to first identify who is doing ethical journalism, so that they can be protected,” said Felix.

Adding that suppression of not only journalists but any person or group is not tolerated by the Chief Minister Pema Khandu-led state government, Felix said that “freedom of speech is an important part of democracy, but it is vital that everyone exercises this right with responsibility.”

The home minister also raised concern over the growing number of unregistered media channels and media persons, and appealed to the APUWJ to regulate their functioning.

The minister extended his best wishes to the journalists across the world on the occasion of the World Press Freedom Day and urged them to “uphold journalistic ethics for a vibrant and progressive democracy.”

APUWJ President Sangno called upon fellow working journalists to uphold the journalistic principles and ethics while practising the profession, and to be the voice of the voiceless without fear and favour.

“Being in this profession, the people have faith in us. We do have a huge responsibility. We should live up to the expectations of the people to make this country and state a vibrant democracy,” Sangno said.