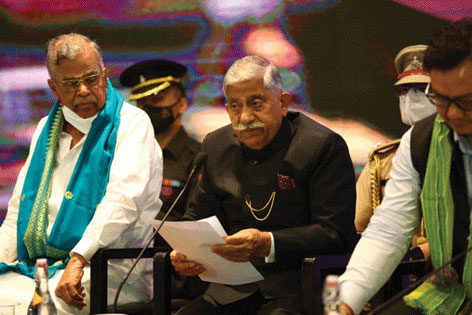 GUWAHATI, 4 May:  Attending the interactive session of the Azadi Ka Amrit Mahotsav- North East Festival culmination ceremony here on Wednesday, the governor took up the issues of special dispersion and rugged terrain of Arunachal Pradesh and sought review of financial and technical support policy of DoNER to meet the requirement of the state.

The culmination ceremony of the Azadi Ka Amrit Mahotsav- North East Festival was presided over by the President of India Ram Nath Kovind.

While citing 13.06 % of the total allocation to Arunachal Pradesh, the governor requested for review of fund allocation of the ministry of DoNER. He also asked for assistance in infrastructure upgradation of educational institutes like Ramakrishna mission schools and Vivekananda kendriya vidyalayas, which have helped shape thousands of lives in the state.

external sources, like World Bank and Asian Development Bank, Arunachal Pradesh has not been able to fully harness its potential.

The governor shared that the Arunachal Pradesh government has organized numbers of programmes in different parts of the state, sensitizing about the freedom struggle, valiant freedom fighters and contributions of the indigenous people in the struggle for independence. (Raj Bhavan)