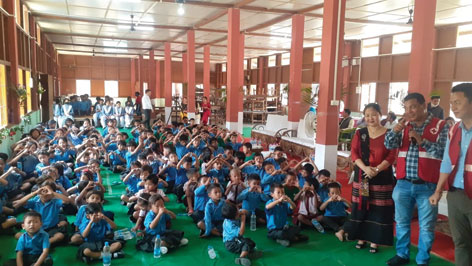 NAHARLAGUN, 8 May: Celebrating the World Red Cross Day, the Arunachal Pradesh branch of the Indian Red Cross Society (IRCS) provided a month’s ration items, blankets and hygienic kits for the students of Oju Mission School in Papu Nallah near here on Sunday.

The World Red Cross Day is celebrated every year on 8 May to honour the international Red Cross movement founder Henry Dunant, and to draw attention towards humanitarian aids carried out by the Red Cross.

Speaking on the occasion, Kaso urged the OWA to carry forward the mission initiated by former OWA chairperson, Padma Shri awardee Bini Yanga. He expressed hope that the children would one day become worthy citizens and serve the state and the nation.

The MLA said that the school’s approach road would be converted into a cement concrete one.

Dr Rumi presented “historical highlights of Red Cross and the humanitarian activities carried out by it.” He also highlighted the life history of Dunant, the founder of the Red Cross movement.

Anya commended the Red Cross Society for the help.

“It has come as a great relief for OWA as we have to fully depend on the government’s aid and assistance to run the mission,” she said.

There are currently 200 students in the school, and most of them are orphaned, underprivileged and rescued child labourers, she said.

Out of the total students, 35 alone are from the Puroik community belonging to BPL families, and 32 are from Longding district, she said.

“As per the 2011 census, the total number of people belonging to Puroik community is 18,600, and three out of the total 23 people from the community, who are serving in various government departments, are the former students of Oju Mission School,” Anya, who is one of the first students of the school, said.

She lamented the lack of sufficient infrastructure.

“We could have accommodated more students, say 400-500, had there been sufficient infrastructure,” the OWA chairperson said.

“We are making all-out efforts to educate the students and provide them with skill training with the limited resources, so that they can stand on their own feet in the future,” she said.

She also emphasised on the need to upgrade the school to 12th standard in the future.

The OWA chairperson praised Governor BD Mishra for his help and concern for the underprivileged students of the school.

A skit presented by the students of the school, displaying how the young children in the mission are brought up with motherly love, care and affection, and how they are provided education along with self employable skill training, and patriotic song and dance performed by the tiny tots were the other highlights of the programme.