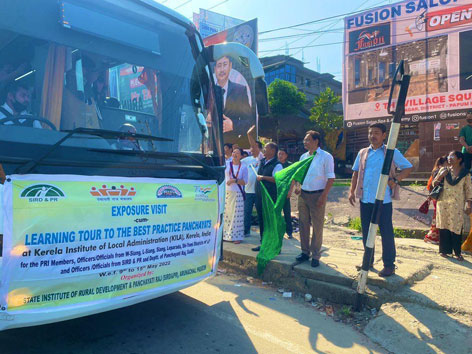 ITANAGAR, 11 May: Rural development and Panchayati Raj minister Bamang Felix on Wednesday said that the state government is committed to make local self-governance in the state truly established with best of the panchayat practices in place.

Flagging off a 30-member team of panchayat members and officials to Kerala on a training-cum-exposure tour, the minister emphasized on healthy growth and development of panchayats in the state to uplift the rural masses.

“Proper grassroots governance, training and learning all the best panchayat practices are must,” he said.

The minister exhorted the panchayat members to try learning all the best panchayat practices so that the same could be adopted and implemented in the state.

The team comprising panchayat members from West Siang, Leparada, Shi-Yomi, Lower Siang and Siang districts along with officials will undergo a week-long capacity building and training at the Kerala Institute of Local Administration.

The exposure-cum-training visit is being organized by the State Institute of Rural Development & Panchayati Raj (SIRD&PR), for the panchayat members to learn from the best performing panchayats in the country.

The team is the first batch for the programme and would be followed by another four teams of panchayat members.

The second batch consisting of delegates from Lohit, Anjaw, Longding, Tirap and Changlang will leave for Sikkim on May 19, while panchayat members for the third batch from Tawang, West Kameng, East Kameng, Papum Pare and Pakke Kessang districts and the fourth batch from Kurung Kumey, Kra Daadi, Lower Subansiri, Upper Subansiri and Kamle districts will leave for Gujarat and Maharashtra respectively on 23 May.

The fifth batch of members for the programme from Upper Siang, East Siang, Lower Dibang Valley, Dibang Valley and Namsai districts will undertake the exposure-cum-training visit to Karnataka on 20 June.

The RD&PR secretary and the SIRD&PR director also attended the flagging off ceremony.