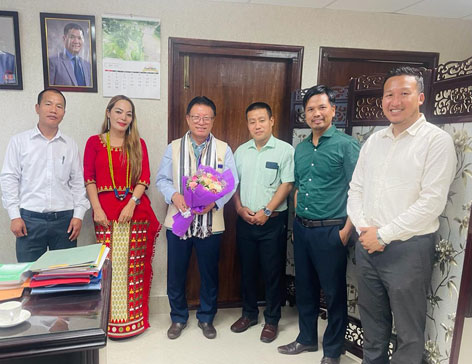 ITANAGAR, 11 May: A team of Arunachal Pradesh College Teachers’ Association (APCTA) led by its president Narmi Darang on Tuesday, met minister for education Taba Tedir in his office chamber at civil secretariat and submitted a two-point memorandum regarding enhancement of retirement age of college teachers to 65 years and professorship for qualified college teachers (associate professors) as per the provision provided in the UGC regulations issued from time to time.

The team impressed upon the minister the need of the demands especially, in view of the New Education Policy.

They said that many states, like Mizoram, Bihar, Jharkhand, Madhya Pradesh have already enhanced the retirement age of college teachers to 65 years.

The team further submitted a draft proposal for recruitment rule (RR) for the directorate of higher and technical education.

The APCTA president briefed the minister regarding the requirement of new RR for the directorate of higher and technical education, which was prepared by a team of senior faculty members, including principals from various colleges of the state with a single objective to streamline the directorate and revamp the higher education sector.

The minister agreed in principle to give priority to the matters placed while acknowledging the validity of the points submitted by the APCTA team.

Tedir called for collaborative works from all the stakeholders to achieve his vision of producing better human resources for overall development of the state.

Later, the APCTA team met the higher and technical education director Alik Jongkey and discussed in length various issues pertaining to the colleges in the state, the APCTA said in a release.