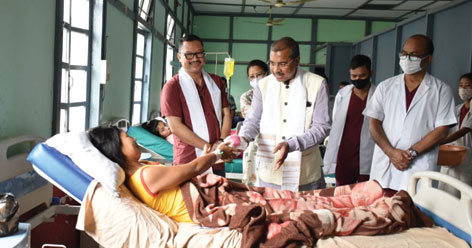 During a review meeting with the stakeholders on the progress of the aspirational district programme, the minister sought the views of the participants and enquired about the problems being faced at the grassroots level.

Commending the progress made by Namsai, which has secured the national rank of 14, the minister urged the stakeholders to “make more inroads to take the district out of the tag of aspirational district.”

Namsai MLA Zingnu Namchoom requested the minister for “more assistance and guidance in making Namsai district in the top most rank in the aspirational district programme index.”

Earlier, Mahendrabhai along with Namchoom and government officers visited two anganwadi centres, the one-stop centre, the district hospital, and the working women’s hostel in Namsai. He also interacted with CDPOs, anganwadi workers, beneficiaries of ICDS schemes, officials at the one-stop centre, and doctors at the district hospital, apart from inspecting the facilities and services.

Mahendrabhai also held a meeting with PRI members, ASHAs, anganwadi workers and NGO members, and praised the district for implementing various central government and other schemes. He expressed satisfaction over the progress of various projects.

The union minister reiterated the commitment of the central government “towards Northeast states, particularly aspirational districts.”