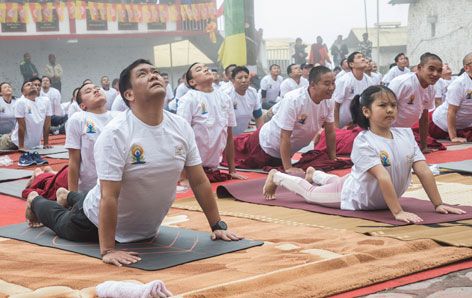 ITANAGAR, 21 Jun: Arunachal Pradesh on Tuesday joined the rest of the world in celebrating the International Day of Yoga (IDY) throughout the state.

Speaking on the occasion, the governor said that yoga provides harmony of the body and mind and enables the practitioners to imbibe peace of mind, good health and positive attitude.

“Today, it is one of the most popular wellness regimes adopted across the world as an ideal way of life,” he said, and emphasised that the benefits of yoga must reach everyone in the country, so that they can adopt it to their advantage.

The governor appealed to the people to regularly practice yoga, and stressed on motivating the younger generation to gainfully practice it.

Chief Minister Pema Khandu joined the event first at the Tawang monastery with monks, personnel of the ITBP, the SSB and the BRO, and students, and later at the army helipad with personnel of the 190 Mountain Brigade and NCC cadets.

Speaking on the occasion, Khandu said that yoga is an ancient and complex practice, rooted in Indian philosophy, which began as a spiritual practice but became popular as a way of promoting physical and mental wellbeing.

“The modern lifestyle has taken a toll over our physical as well as mental health. In pursuit of wealth and success, health no more is in our priority list. Therefore yoga is the only way for a healthy body and a healthy mind,” he said.

“You don’t need any equipment to practice yoga and can practice it in any weather condition,” he said.

Khandu advised all, especially the youths and children, to make it a habit to practice yoga every day and not confine it to only the Yoga Day.

Speaking to the officers and jawans of the 190 Mountain Brigade, Khandu said, “Yoga should be a daily routine for army personnel posted at high altitude border posts.

“Besides being physically fit, our jawans need to be mentally fit too, and yoga is the means to achieve it,” he said.

Dong is the eastern-most village in India, near the point where the borders of India, China and Myanmar meet.

Dong receives the first sunrise in India, thus earning it the nickname ‘India’s Land of the Rising Sun’.

Rijiju appealed to the people to embrace yoga for their wellbeing and celebrate a healthy life.

He thanked the prime minister “for his idea of mass demonstration of yoga on this day at 75 iconic locations across the country.”

The theme of this year’s celebration is ‘Yoga for humanity’.

The main event at the district level was organised at the Golden Pagoda in Namsai district. It was attended by union MoS for Steel & Rural Development Faggan Singh Kulaste and Deputy Chief Minister Chowna Mein.

“Everyone should learn and practise yoga because it’s not only beneficial for one’s physical health but also for mental health,” Sona said.

The IDY was celebrated in all the district, subdivision and circle headquarters, and saw the participation of MLAs and ministers, DCs, administrative officers, members of the public, and army personnel.

The day was also celebrated by Pasighat-based North East Institute of Ayurvedic & Folk Medicine Research, the State Health Agency, the civil secretariat, RGU, the IMC, the Oju Mission School, various other schools and colleges, and government departments, including health and tourism.

The Central Bureau of Communication’s regional office in Itanagar organised a ‘mini-integrated communication and outreach programme’ at Green Mount School in Itanagar to sensitise the participants to the importance of yoga.