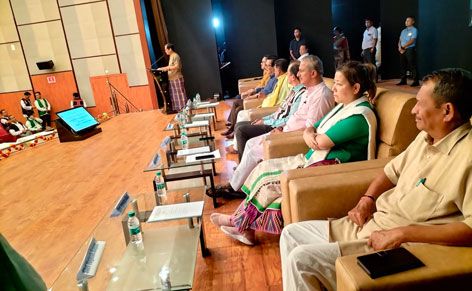 NAMSAI, 22 Jun: National president of the Akhil Bhartiya Vanvasi Kalyan Ashram (ABVKA) Ramchandra Kharadi assured to support in documenting and preserving the tribal culture and customs across the nation. He further said that the tribal people are to ‘come forward to protect from being converted.’

Kharadi was addressing a public meeting held at the Multipurpose Cultural Hall here in Namsai district on 20 June.  He also enlightened the people about the activities carried out by the ABVKA for the larger interest of the tribal people across the nation.

While appreciating the state government’s gesture on creation of separate department for the indigenous people of the state, he appealed to the DCM for providing skill development trainings to the youths ‘to become a job giver rather than job hunters’ especially through IIT graduates.

DCM Chowna Mein was also present in the meeting.

Earlier, national organizing secretary of ABVKA Atul Jog spoke about the activities of the Kalyan Ashram in entire nation since its inception and achievements so far in nation building through empowering the tribal people of the nation.

He also talked about how Kalyan Ashram is assisting in preservation and documentation of the rich tradition and culture of the tribes of the country.

Delegates from various organizations, PRI members, general public attended the programme which was organized by the AVP.